Elements of a successful improvisation

Many different elements determine an attractive and successful improvisation. The general characteristics of improvisation are represented by the style. Let's start, therefore with the style definition.

A style is the combination of motives, musical elements (mode of expression, rhythmic variation, swing, accents, etc.), and player actions, that form a separate pattern in full agreement with itself. This means that the main feature of any music style is that it can be recognized and can be distinguished against another. At the same time, the style is not just a historic attribute of the improvisation (Dixieland, Swing, Bebop, Cool etc.). If we look back on the jazz-history, we will determine that the successful jazz-musicians, like Louis Armstrong, Charlie Parker, Dizzy Gillespie, etc. possessed a personal style that has developed into one of the general (recognized) jazz-styles. Also on the question: Is there a certain style of the Jazz play that will guarantee you the success? - The answer must be: "No!", because, among the jazz-musicians, who became successful, there are a variety of styles.

While it is important for an actor to develop his own style, this should not happen single-handed. And this implies, to never lose the connection to the jazz tradition.

Because style is a combination of all available music and other elements, let's first deal with these elements. 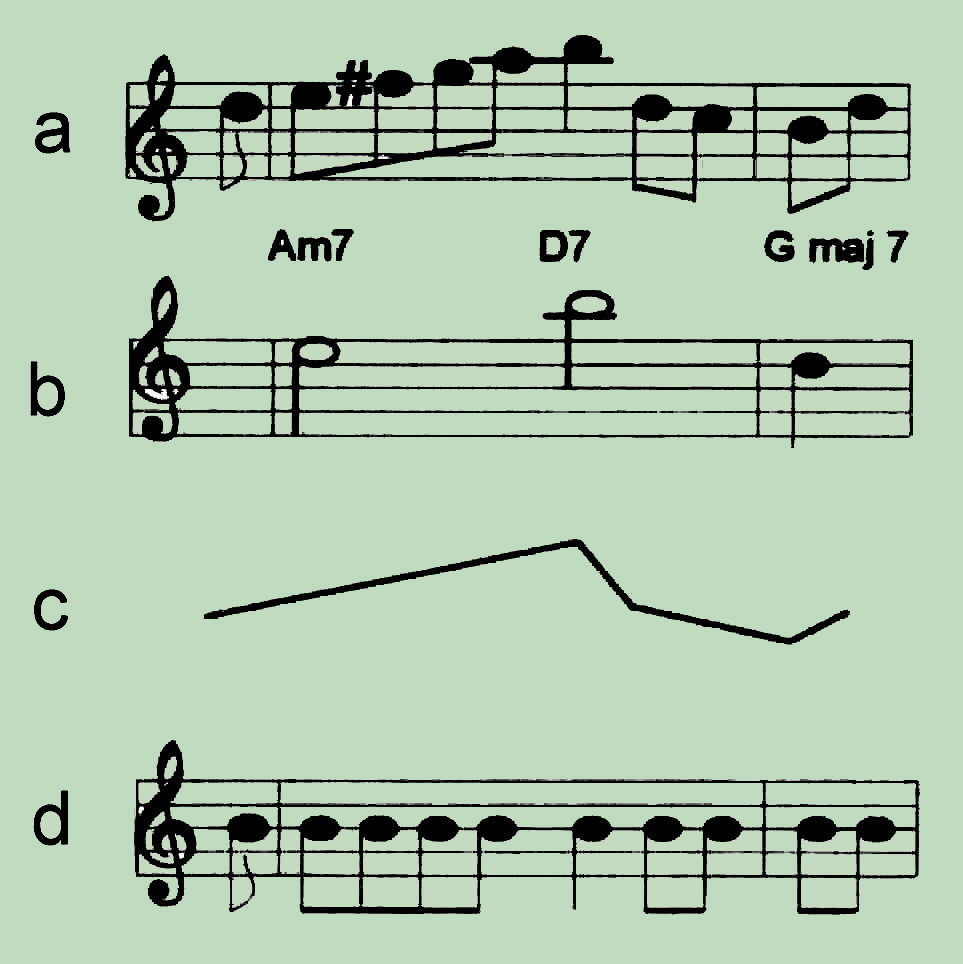 Melody, together with the harmony and rhythm, is one of the basic elements of the music. Melodies can be organized from creative, composing or improvising musicians in many different ways. Typically, however, a melodic element begins with a sequence of only a few notes. A complete piece (as phrase, melody, etc.) can be developed from these small thematic units or musical thoughts, named motives (a) . The motive is the smallest melodic unit, like a short sentence in the language, on which basis the musical Ideas and their expression originates.

If the sequence of notes moves in the same direction, the last tone will be heard, independently of the direction or the length of the row, as dominant. At this place, the motive reaches one of its heights. Because of this, one names these notes also the key-notes of the motive (c) since they are usually most responsible for melodic content and the harmonic affiliation of the motive. Ascending and descending linear movements from several notes form the profile or contour of the motive (b) as shown in the picture.

The continuous smooth contour lines that are determined from scale steps that are related to the chord sequence are named scalar lines. In contrast, these lines based on the big interval-jumping are called an angular. Of course, the lines of a certain motive can combine these two types. At the same time, the key notes must not always sound consonant. Through it’s in or out of tune, these lead to the tension and relaxation. Related to the chord sequence should also be considered, that the production of the tension more stands with one dominant chord as with the tonics.

Knowledge of the elements of the motive is very helpfull to the accompanying creation of the musical phrase. As, for example, rhythmic division, that form the basis of the original motive (d), as also its profile and the rhythmic can be used for composition of new ideas (motive variations), for example through adapting the motive, so that harmonizes with another chord sequence. Through this melodic transformation, the original motives can be played against different chords. Such a procedure is very typical of jazz improvisation and may contribute to present a specific desired style sound.

In addition, a performance of a jazz player contains in general different variations in height and duration of notes. In the music terminology, any deliberate deviation of the normal tact pulse, accent and rhythm, is named syncopation. This evokes the notion of tempo acceleration. Therefore also these notes are in a jazz-language called "drive notes". This is in jazz very usual and gives the melody a more natural sound.

In this example (Dizzy Gillespie) the syncopated formation at the start generates the acceleration of the phrase and after the fast play with the eighth notes, directs the second line by renewed syncope the attention to the height of the phrase, accentuates it and leave it recognized as such.

Dynamic rhythmic variations can alone manage powerful and dramatic effects in an improvised solo provided that the modification is enough in order to be detected by the auditors. It is always recommendable to alternate fast playing (for example, eighth, triplets) with quiet breaks (half note, full note, pauses). Furthermore, loud or quiet playing variations or volume contrast are also the important components of the jazz style.

Fundamentally, in analogy with the language, a motive can be compared with a sentence. Thus, it is necessary to cast down a sign at the terminal of each sentence. Here is not unimportant whether it is a dubiousness of a main clause (point) or dependent clause (comma). Of course the musical punctuation is another, that most corresponds to the spoken than written sentence and, therefore must be expressed both melodically and also dynamically (accent). However, from own experience, we know that with a comma a tension arises, while by a point the content of the sentence is closed what leads to the relaxation. For this, one can often determine that the problem for beginners is not the beginning of the phrase but predominantly its effective end. Therefore, the improvisation looks sometimes like an infinite row of notes, without recognizable playing ideas, or as a series of new starts, which never leads to successful resolution. In order to avoid these, the young and inexperienced musicians should more concentrate on right endings and clear separations (pause) between playing phrases. During the pauses, also the new ideas can be envisaged ("inventive" pause) before they are played.

If the harmonic affinity between melody and harmony is kept, one talks about the playing "within". Nevertheless one is also free to use notes "in between", that are not in the scale at all (playing "outside"), if with it certain rules are not injured, that guarantees best sound. The simplest "outside figure" is the enclosure, in which a target note is introduced by the note half above and half beneath the note tuned to the current accord (tension ⇔ relaxation).

At the conclusion, I want to show the different variation possibilities on the basis of the analysis of the typical "reefs" of the well-known musicians, as they are represented exemplary for the style of these musicians. Selected are five examples from the album “jazz reefs for guitar” (Amsco Publication 1979), that all refer to the II-V-I-change.

The first phrase (George Benson) comes at the start of the second bar to the height point, that is before the chord note (F# in D7), accentuated by a double enclosure. For the same purpose applied Pat Martino, against it, a triplet as rhythmic figure. In the first phrase of Kenny Burrell, a weak accent is generated by the short drop (can be compared with a comma) and the phrase flows further up to the second height point, that is emphasized by a note jump. Herein, the same accent works itself more strongly (tonics).

More variable is the 2. phrase von Kenny Burrell in the next example, that is brought to the height-point by staccato played syncopes, which give this phrase a particular impression.

In the last example, von Joe Pass, the height-point is simply shown by direction change. However seen harmoniously corresponds the phrase more to the "pepped up" chord progression Am9, D7+5-9, Gmaj9.

In summary, it can be stated that the approach of all four musicians is very similar in these examples, only the means used are different. The variety of musical expression in jazz will be achieved by selective insertion of conflicting elements such as halftone above or beneath the chord tones for a tension to reinforce (before relaxation), arrhythmic application of “driving” notes, playing "outside" and back “inside” according to the current chord, and similar.

At the end, one simple improvisation to the famous piece Jada as an example , of course, according to the styles those tradition piece.