Determination of residual strength of components with surface cracks

Characterizing parameters of the crack size 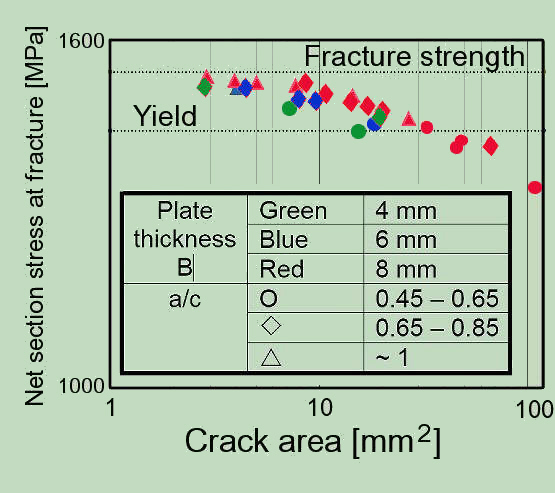 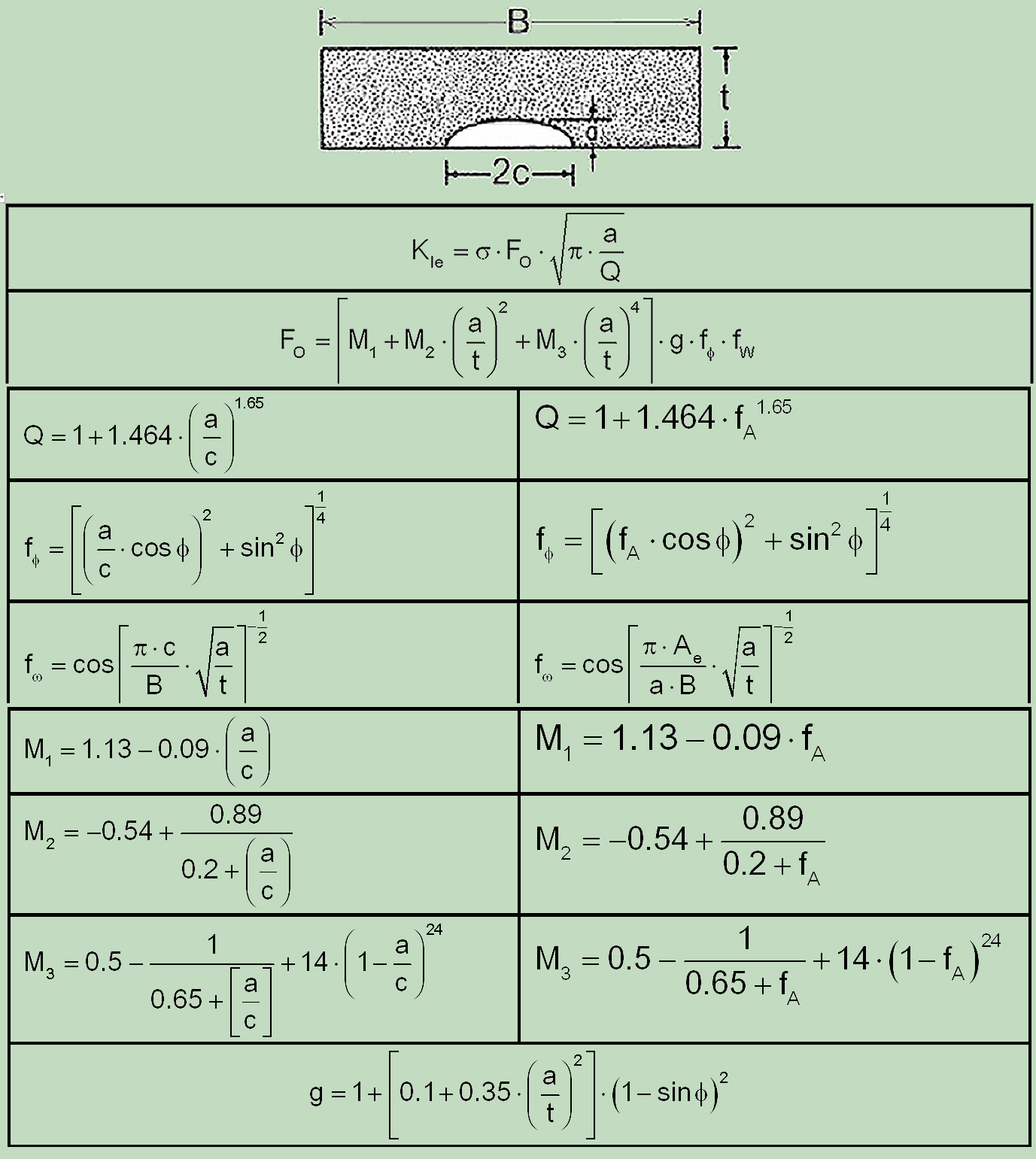 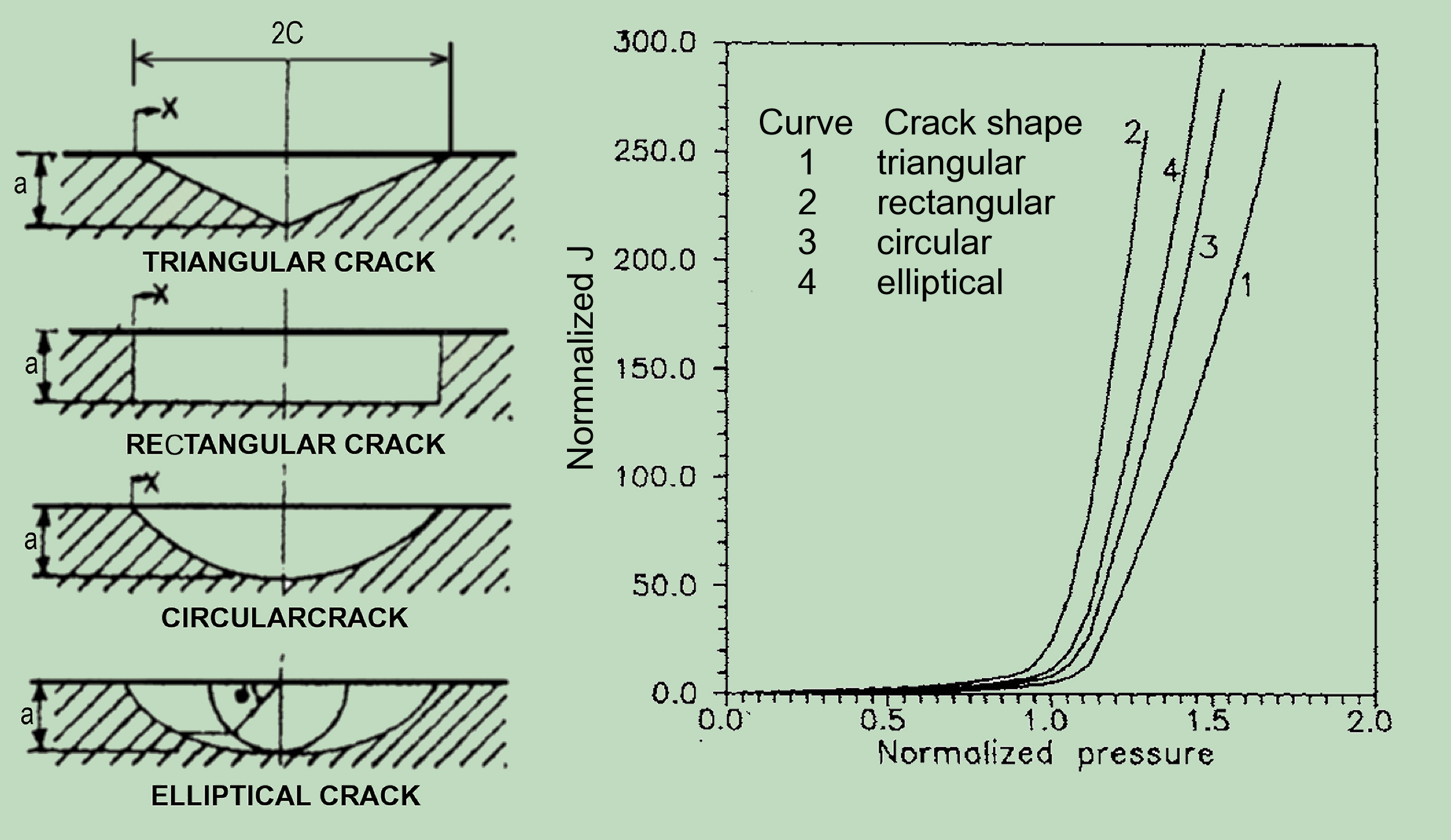 Presentation of the new method and proof of its advantages

Lr.....The proportion of the applied stress to the stress at which the yielding strength of the material is exceeded, i. e. the plastic strains in the critical section achieve significant values.

while based on the known LEFM relationship for the J-integral

applies, it is natural to extend the same relationship for the elasto-plastic range (based on the notch approximate relationship to Neuber)

By this extension a robust solution is gained that can be used in all regions between "elastic" and "plastic". The validity of this extension has been examined by several FEM calculationsand confirmed without exception.

Constitutive laws based on classical plasticity generally define total strain as the sum of its elastic and inelastic components, with independent constitutive relationships describing each. Therefore, the J-integral is also written as a sum of two contributions:

As to determine, the elastic component of the J-integral here does not consider the Irwin's plasticity correction. In fact, this correction distorts the relationships and is consequently not recommended. As is well known ductile materials are capable (due to the plasticity) to reduce (stress redistribution, blunting) the effects of the crack (or notch), while the Irwin's plastic-zone correction is doing exactly in the opposite direction (increasing actual crack size and because of this more elevated stress intensity factor level). For ductile materials, this correction in terms of an increase in crack size is incompatible. On top of that, under the plane strain conditions is this correction substantially smaller than under the conditions of the plane stress, by which the important effects of the local constraints are even falsified.

Clear, approaching the yield strength the inelastic part of strain becomes more significant compared to the elastic one, so that the corresponding effects, i.e. the increase in J-Integral part gets on a significance, but this is considered by the second term in the (4) formula.

Remark: Detailed derivation should be found in the literature sources given at the end of this text part!!!

This derivation leads to the following relationship:

so that, based on the usual representation of the stable continuous stress-strain curve of the material (σ = B.εpln) according to Ramberg-Osgood, the corresponding relationship for the FAD line can be determined:

For the comparison the known R6 solution:

gives after rewriting to the following expression:

Compared to the solution (6), additional reduction factor in denominator appears:

The origin of this difference can be derived (under the consideration that if the tension in the net cross-section achieves the yield level, the first term = 1), so that follows

This indicates that this relationship is based only on the consideration of PZ correction, which even in the given form does not consider the strain hardening effects.

Moreover, the additional increase of the plastic part of the J-Integral to the design of FAD (in R-6, SINTAP, etc.) is based on inhomogeneous relationship:

As already stated (see the discussion above), the PZ correction has not the plausible theoretical background and is therefore for the application on ductile materials counterproductive. As for the rest at onset of nonlinearity of the stress-strain curve (already below yield strength) the corrector is based on the εpl in the through the crack weakened section only. At the same time, after Lr ≥ 1 the Plastic Zone equals to the total critical section and the application of this correction for the evaluation of effective crack size is senseless.

Consequently, the second argument in (7) has to be removed in the area where Lr ≥ 1 .

The application of (6) does not mandatory exclude the PZ correction. This can be of course taken into account in the calculation of K for the actual geometry and loads, by which the use of a more meaningful relationship (Shih, et al.), which also takes into account the strain hardening influences, is recommended:

A comparison with the FAD based on both methods is shown in the accompanying example. By proposed σ-ε-Method no continual residual strength reduction (based on KIC, JIC, etc.) originates in the linear-elastic range (up to 60 -70 % of yield strength). This is not merely the consequence of hardly visible plastic strain part, granting to the curve representation σ = f(ε) (7), but also fully corresponds to the observed behavior. Based on the R6 curve, however the measures of the material's resistance KIc, JIc, etc. are only unchanged for σ = 0 in the cross-section (and should be measured under this condition, which is hardly the case). Furthermore, the additional margin of safety is only effective below yield strength, where above yield strength the R6 curve produces even the non-conservative solutions. 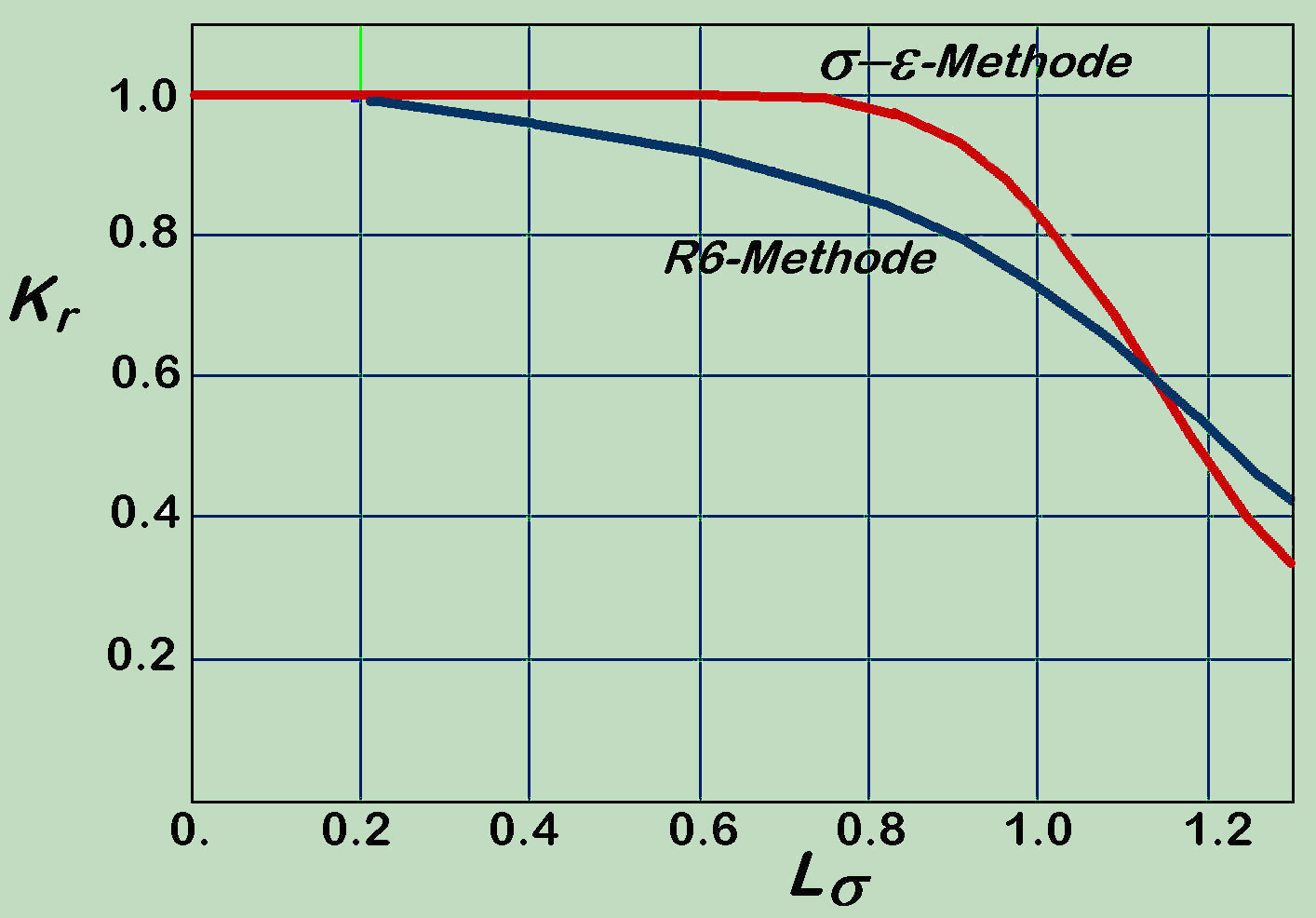 Validation of the new Method

The proposed stress-strain method is verified for the application to the most critical thin-walled components with surface defects through numerous tests (carried out also on component-like specimens). 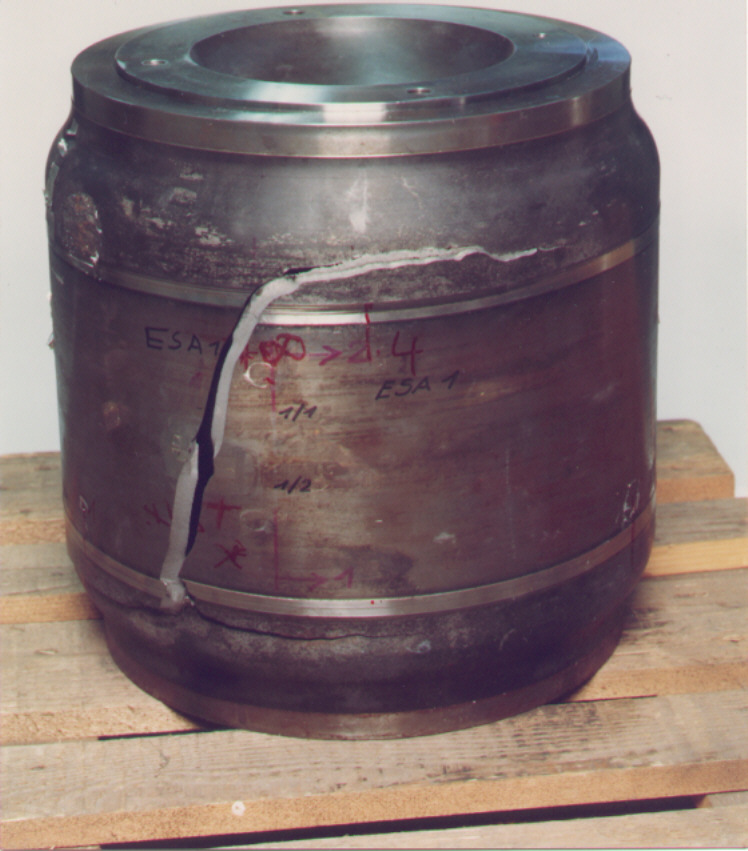 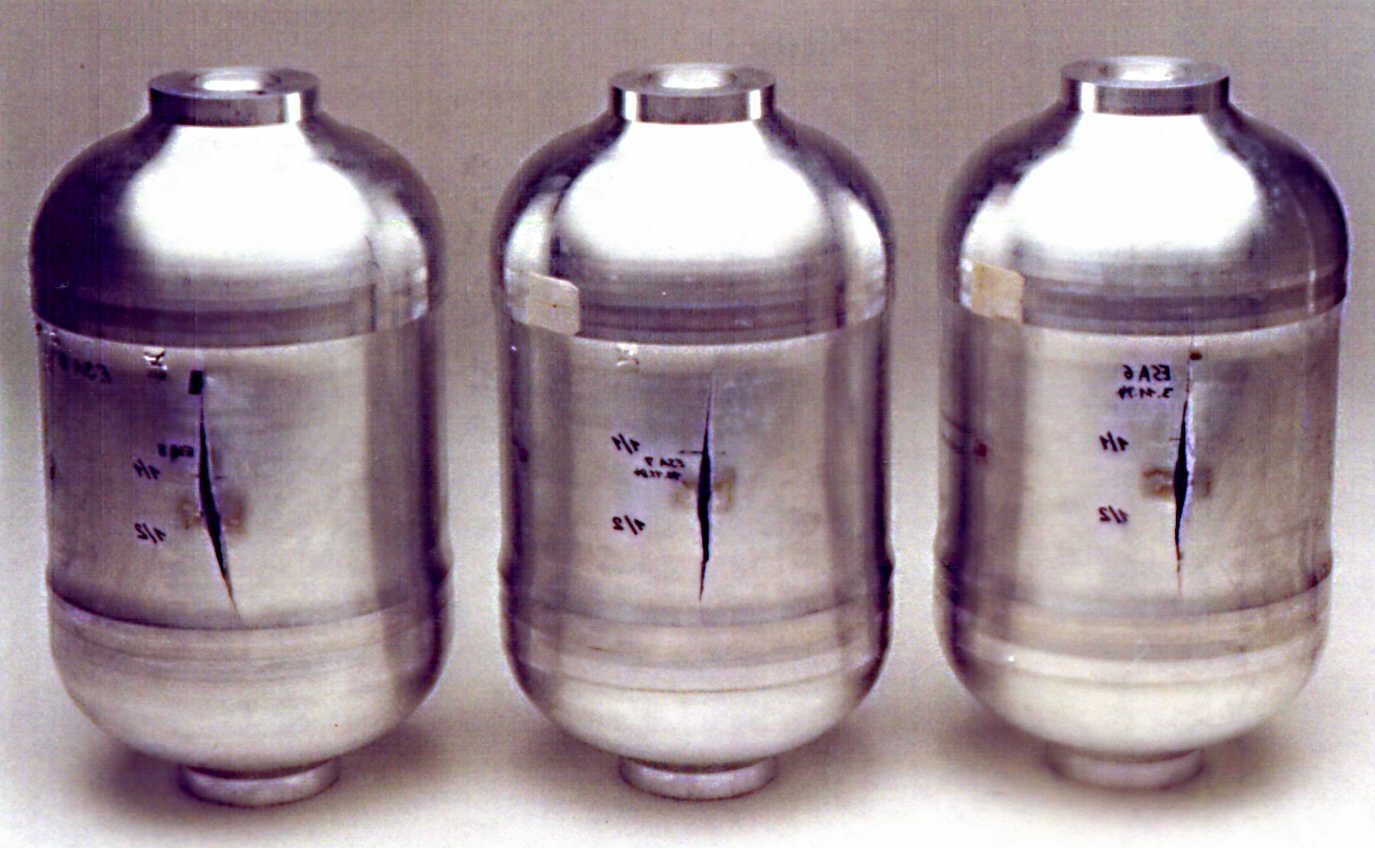 The accompanying diagram confirms the same trend as in the FAD comparison above. The agreement with the experimental results is for the proposed method perfectly. In case of R-6 Option 2, in opposite, the results indicate a systematic deviation from the experimental results, which lies in the structure of R-6/Option 2 formula of FADs and makes finally the necessity of PZ correction in (7) fully superfluous. 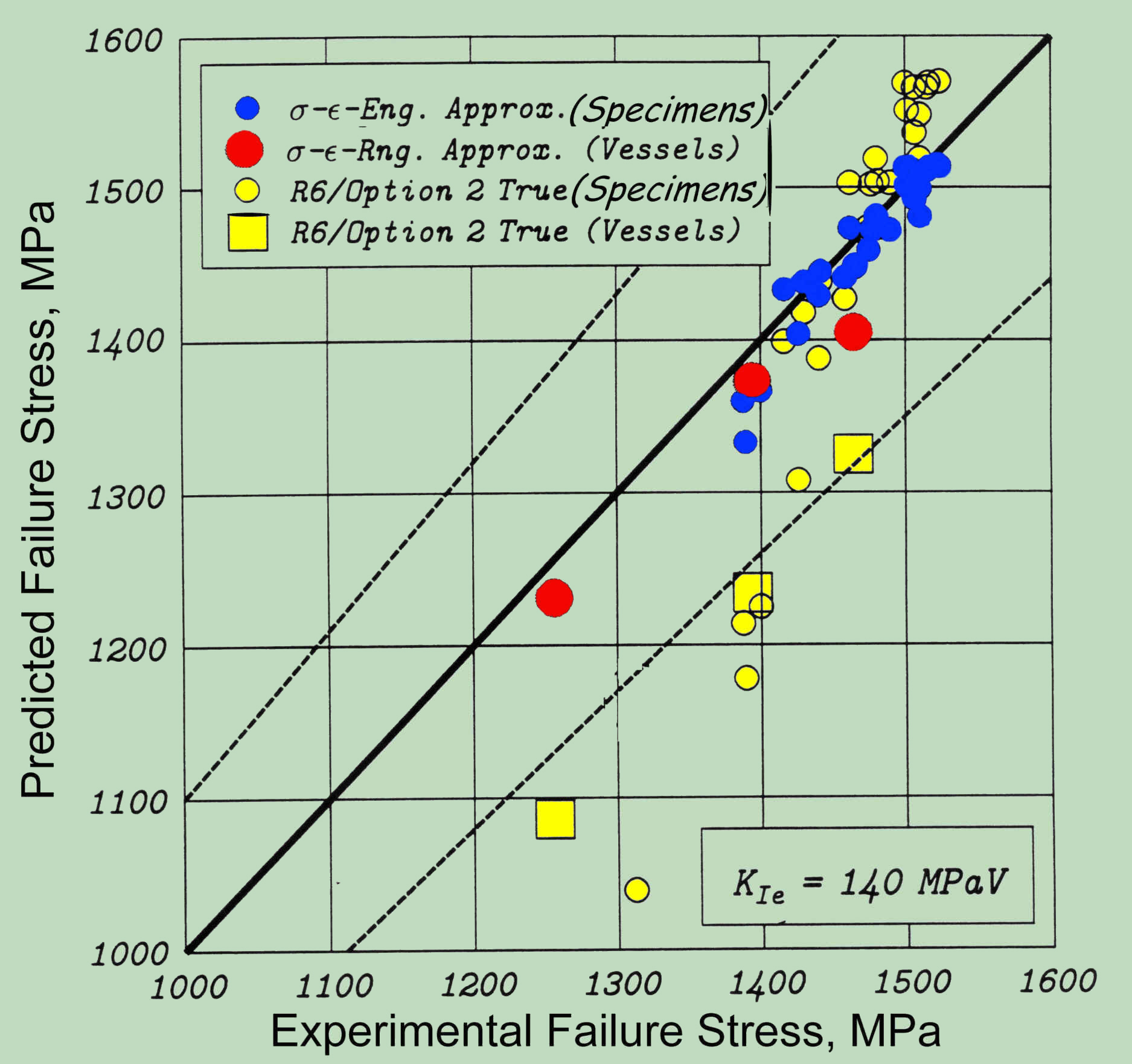 Increased accuracy of the here proposed method, in comparison to existing methods (R-6, FAD, etc.), both below and above the yield strength avoids the unnecessary conservatism by the design in this for the applications most important area. Interesting for numerical example (?)

and for corresponding papers (in engl.):

Development of residual strength evaluation tool based on stress-strain approximation, in Int. Journ. of Fracture 88 (1997) pp. 129 -152 (Unfortunately subject to charge), oder
Proposal for the Improved Design of Reliable Failure Assessment Diagrams for Components with Surface Crack, in Structural Integrity and Life Vol. 13, No2(2013) pp. 99 - 108 (free) 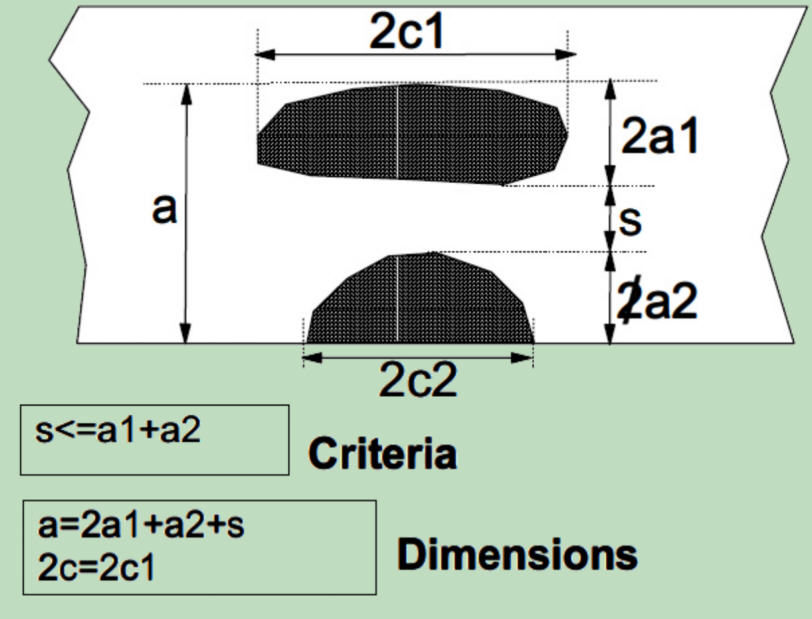 Undesirably, also in SINTAP other weaknesses of the existing criteria were taken thoughtlessly, as, for example, the treatment of crack interaction.

In none of the cases the crack closure effects of the material between the two basic cracks has been considered that naturally with the increase of s also increase. The result is, whenever s is smaller (less closure effect as well) the resulting crack will be smaller, i.e. evaluated as less dangerous. On the other hand, for the case s = a1 + a2 the resulting crack reaches its maximum size, yet though right after that (s > a1 + a2) the interaction of the two cracks will be ignored. A reasonable transition is entirely missing. 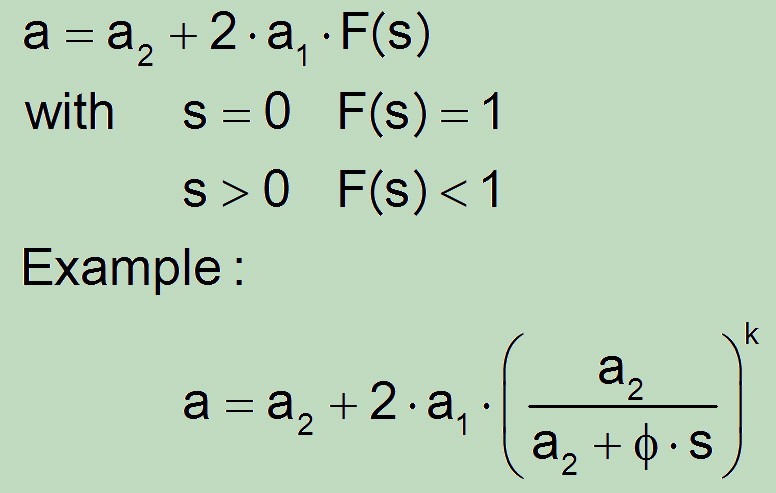 An adequate relationship may, for instance, take the following form:


Unfortunately, for a reliable proposal in this regard and at this time, accountable experimental and/or numerical investigations are missing.